Controlling the madness of work with two apps

Working at Octopus Energy is madness. It’s a good madness, I won’t lie. I love what I do and I’m very lucky and grateful to have that. It doesn’t stop the madness though.

A big change for me came when we started to become reasonably big in size, and I had to transition from being “the guy that does all the front-end all the time” to “the guy who runs front-end”. Who’d have thought that the latter is way more time-consuming than the former. At some point I’m going to write a nostalgic account of my time at Octopus Energy so far, but for now let’s talk about controlling work madness. That’s the title and I’m going to stick to it.

A big thing that I had to handle initially was staying productive whilst having both more information and requests coming in than ever before, and having less time (or, at the very least, much more fragmented time) in which to deal with them. Beta Ashley tried to solve that problem with writing long lists on pieces of paper, purchasing a forest worth of post-it notes and, to complete the terrible trifecta, work more hours to sort it all out.

I now feel like I’ve got it down a bit more, and the answer seemed to be taking advantage of two apps – mainly Fantastical and Bear.

Fantastical is a calendar app.

I can hear you already:

You bought a calendar app? why?! There are perfectly good calendars you can use for free. Hell, every Mac comes with one

Very true, but it’s just not as good as Fantastical. Seriously, this app is so great - it has brought order to all of my chaos. The best thing is I’m still finding new great things about it. Here are the main things I love right now:

Fantastical has a small dock icon that, when clicked, opens up a mini calendar with an overview of your day. Most importantly though, it also has a free-text field where you can type a sentence about what you want it to do and it’ll interpret it. For instance, I could write:

Meeting with the team at 10am on Thursday for an hour 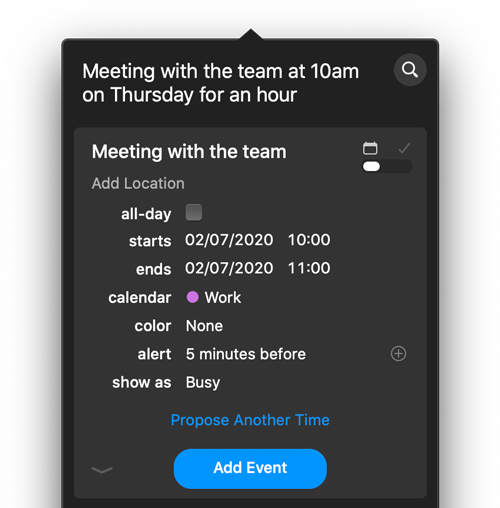 It’s just the best thing ever. If someone is chatting to me and needs something later on, I hit up the menu bar at the top of my screen and type it in. If I’m working on a problem and a thought randomly hits me that I need to chat to Luke about tomorrow morning, I hop out of my thought process for all of 5 seconds and do this:

It works just as neatly on the mobile app too.

I’ve found the key is to stop trusting my memory with lots of small things like this. Not because it can’t handle it, but because if it doesn’t have to do that stuff, it can give far more important things the time they deserve.

Now I don’t miss meetings. I don’t forget messages, to-dos. I’ve seen quite a lot of people utilise slack reminders more and more now that it’s a little more feature-rich, but I’ve personally avoided that because I try my best to stay away from Slack late at night.

Hop straight into a meeting

If your calendar invites have Zoom / Google Meet / Microsoft Teams / Skype / whatever links attached to them, Fantastical helper gets even smarter. It recognises the link and, when it gets close to the meeting, you can click the dock icon and it’ll throw you straight into the meeting. It also makes it extra beneficial to keep info like that in your calendar rather than in an email somewhere. It’s one less thing to worry about, and you’re no longer a couple of minutes late every. single. time. Being on time matters in my opinion – it shows you value the other persons time. Simple.

Nothing special here, except you get everything in the mobile app as you do the mac app (actually that’s pretty special in some cases). Both of the apps in this post link up seamlessly with Mac, iPad, iPhone, and Apple Watch. It’s pretty standard these days but they do it well, and it brings very welcome consistency.

Your immediate response to the last point may be “that’s pointless” but give it a second, and you start to think of how many times weather can be a factor when meeting up with people or choosing what to do. Then, it becomes yet another friendly reminder.

Bear is a writing / note-taking app.

I used Apple notes for a while, and I actually think it’s one of Apple’s better apps. I think when you’re first looking to organise your life it’s a great intro to that. However as time went on, more and more things grated on me. They were all answered in Bear.

My favourite thing about Bear is that, by default, it doesn’t have a folder structure. Instead you can give a post any number of tags, anywhere in the document, and Bear automatically organises them. This makes it neater when you make notes on the fly. You also don’t have to decide which folder a note should live in, or have duplicates of the same note in different places. Neat features like that are all over the place in Bear:

You can also create your own sub-structures for tags, like this:

Occasionally, t’s a bit of a pain to have tags in the body of a note (I’ve left them in places where I’ve copied the contents from Bear accidentally before), but the pros outweigh the cons on this one.

I’m writing this very post in markdown! I got used to it after using it a lot in Github, and then realising that it felt cleaner and more consistent to write in that style all the time.

It makes things really easy as you can copy content straight from Bear into a blog framework that supports markdown (turns out loads of platforms do - not just newer ones like Jekyll and Ghost, but Wordpress too!)

Bears uses a slightly different flavour of markdown to the original, but that can be changed by turning on “markdown compatibility mode” which I did. That way there’s no need to change anything if you use the above workflow constantly.

You can throw anything into it

Images, links, documents, zip files, videos. It handles them all without complaining. It even has highlighters for a massive range of programming languages. It’s clean but doesn’t lose technical depth in terms of being feature-rich.

You can lock the whole Bear app using a password or FaceID, or encrypt individual notes that you’d like to keep for your own eyes.

There are no distractions at all. You can even pop the note that you’re writing out of the main UI (called “focus mode”) if you really want to concentrate on nothing but your words. It’s the closest thing to paper on a Mac, and it’s beautiful: 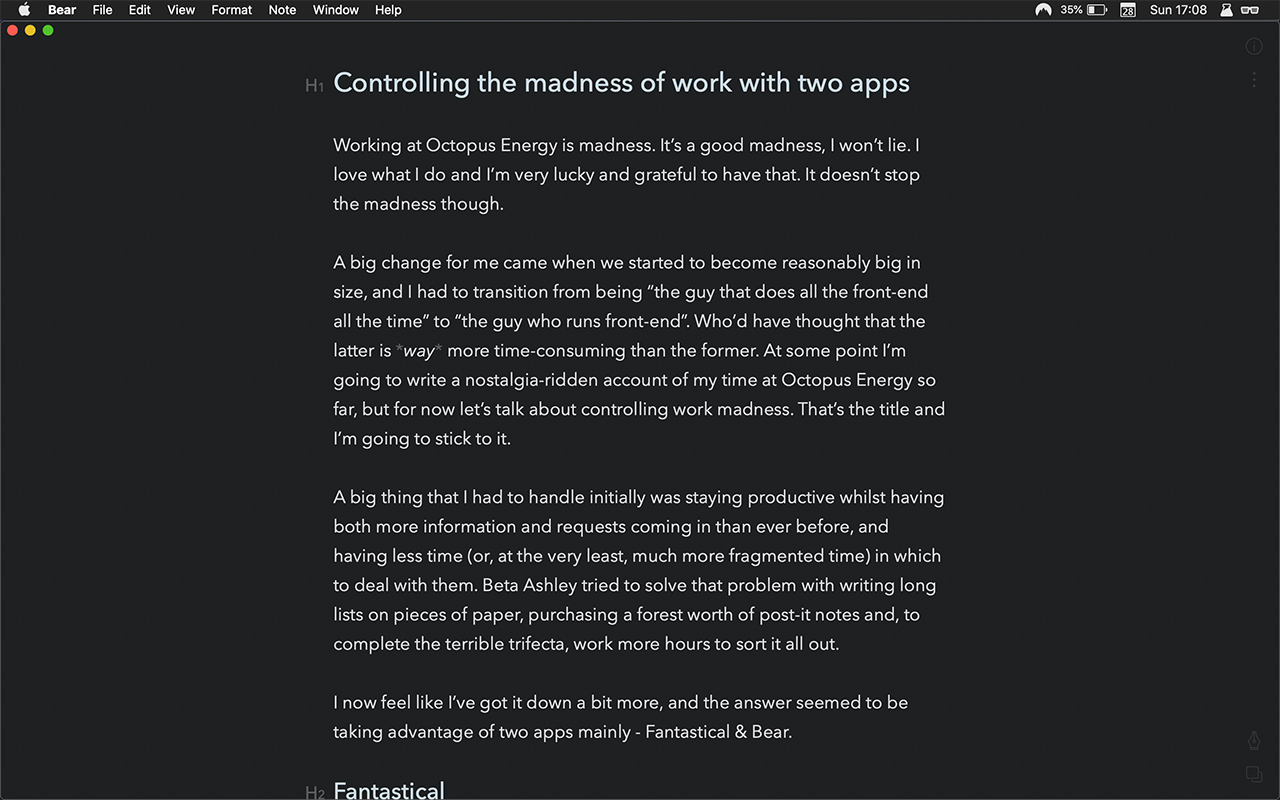 Writing on the mobile app is pleasant too. You get a small toolbar to maintain good formatting even on a small screen. Simple and lovely.

This is where it starts to get a little more nerdy, and is entirely optional. Bear has ‎Workflow and x-callback-url built in, so you can automate the creation of notes, and the searching of ones you already have. This means that nothing is lost when inspiration strikes and you have to get it down quickly.

A great example of this would be the Bear Alfred extension that Chris Brown built, which allows you create a note, search by tag, or fuzzy search all notes in Bear straight from Alfred. 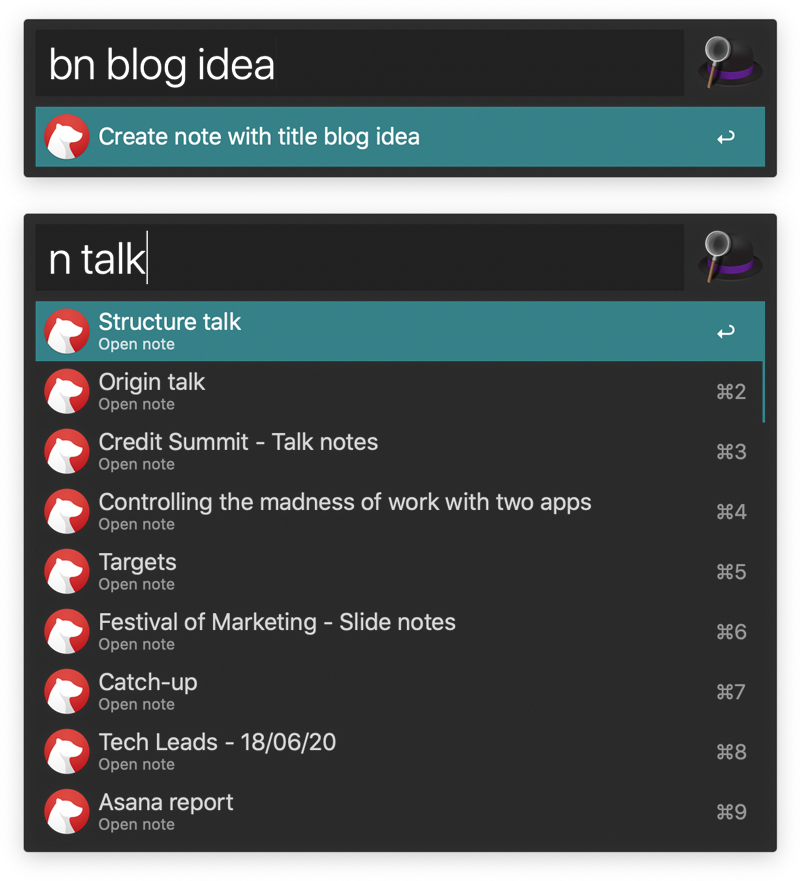 Once you get used to using those couple of shortcuts, Bear can become a habitual part of your workflow.

What do they cost?

It might seem weird to say, but I really like paying for good apps. I’m fascinated by the mindset where spending £5 on a beer is perfectly reasonable, but spending the same on an app that you’ll likely use forever feels excessive. Either way, great apps take time and I’m happy to support the effort someone puts into building them in return.

Fantastical isn’t cheap. The mobile app you can pick up for a few pounds but the mac app is a bit more of an investment. I managed to grab it on a black friday deal so I’d recommend keeping an eye out for things like that. At this point though, I’d pay full retail price if I had to. It’s that good in my humble opinion.

Bear takes a slightly different approach. Their apps are technically free, but they operate a subscription system to unlock its pro features, with annual and monthly options. I think this is the way to go to be honest, because you can try it hassle-free to see what it’s like, and it also creates a sustainable business model for Bear, so there’s less fear that it’ll go bust, or undeveloped for years.

I think it’s clever, because allowing people to actually use the app without hiding it behind a paywall acts as the best advert for it, and as soon as people are hooked, the frequency they use it, plus the features that the pro license unlocks, makes it an easy sell. At this point pro costs ~$15 a year, and for dozens of uses a day, it’s a no-brainer.

So there you have it! As with most apps, you have to fully commit to using these in order to get the very best out of them. Without everything I’m doing being in Fantastical, or all of my notes and posts in Bear, I can’t trust either of them as a source of truth.

You have to be pedantic about the use, otherwise it loses all of its power. When something needs to go in there, I stop what I’m doing right away and add it - it becomes a habit really quickly.

EDIT: Having received some advice from the great and Powerful David Winterbottom, I’d recommend this Alfred integration for Bear by Chris Redford instead. It’s more feature-rich, and is apparently significantly quicker when you have a lot of notes.