Good ways to manage a remote team in lockdown

Just before lockdown, someone in my team mentioned to me her plan to live away from London (our base for all tech roles at Octopus Energy) permanently.

Seeing as tech is such a liberating space to work in, and Octopus Energy isn’t the sort of company to let something as small as a few hundred miles prevent someone from continuing to work for us, I started to brainstorm how I could make a work week as inclusive as possible for someone that wouldn’t be in the same room as the rest of the team most of the time.

In retrospect, it was quite a good time to start thinking about it…

I started researching other companies that seemed to do this well already. I found a great deal of insight in Trello’s how to embrace remote work guide. There was a lot on that particular page about ‘debunking the myths of remote working’ which, I believe, are currently being de-bunked en-masse across the country as a heavy percentage of the population trials remote working. It’s my hope that companies that were very anti-remote working start to see it in a new light, and many places that were inadvertently forced to accommodate remote working will at least consider doing so long-term. After all, there are many benefits to offering it as an option.

I won’t be going into that specific area here (so much good content has been written already, and anything I write would feel plagiarised). Instead, I’d like to share some adjacent ideas. Ones that I tried to adapt to work for those working remotely but only for a limited time.

There should be a clear distinction between the two: The mindset of those forced to work from home due to lockdown will likely be quite different to those who have chosen to do it previously, and will almost certainly continue to do so after the pandemic has subsided. However I feel as though you can help both mindsets using the points below, and normalising them swiftly.

I can’t claim that this setup is perfect (as with all things we do, we try something fast and then iterate on it until it works well for us), but here is what I found:

I’ve heard this a lot. Nearly everyone seems to have reached that point, just at different times. And it’s a fair point - what used to break up a working day is gone. There is no commute, no idle chatter by a coffee machine. It’s weird what we miss - it gave us time to decompress. Even those though, don’t break up a working week - if anything they repeat as frequently as work.

About a year ago, I made it commonplace for every front-end developer to work remotely on Wednesdays. It made sense to me - it broke up the week, allowed a change in routine around the other days, and enabled people to get a few chores of pieces of life admin done around their work without feeling guilty. I even factor in that they would get a bit less done on that day, but they’d feel much better for it. One person would go for a swim. Some would get deliveries scheduled, others would read during the same time as their usual commute.

There is a point in the Trello guide that says that you “shouldn’t assume that remote workers are always around” and it should apply now too. Things like flexible and irregular hours shouldn’t be thrown out because we have to stay at home most of the time. Someone should be allowed to start at 10am if it works for them, and people shouldn’t be admonished for not accepting an early or late meeting because they “have nowhere else to be”. Their time is still theirs, and front-enders are offered the exact same freedoms as they had when we were all in the office together.

The same freedom also applies for when someone wants to get on with some work without interruption too. Now that all conversations happen through tools like Slack and Zoom, a lot more pressure gets placed on people’s ability to respond in a timely manner and keep their inboxes clear. This seriously eats at productivity, and the fact is you’ll never keep the inbox clear for long – there will always be another message. For this, being disciplined in taking time to concentrate solely on work, and making it clear you’re doing that, is paramount. For that we use a slack emoji:

Side note: I actually intend to trial 4 day weeks for the team at some point. To do that though, I need enough data about what the team currently gets through work-wise in a 5 day week so that I have some data to compare it to. This leads on nicely…

Wait, that happened on Monday? That feels like forever ago!

I end my week these days by writing a status update for front-end’s work for the week. I’ve been doing it for a few weeks now and I love doing it. It provides me with a neat end point for the working week, and I can share it with a range of people so they can see how their work is going without fielding a lot of extra questions. Most importantly though, everyone in the team gets to reflect on what we’ve accomplished together over the course of the week. 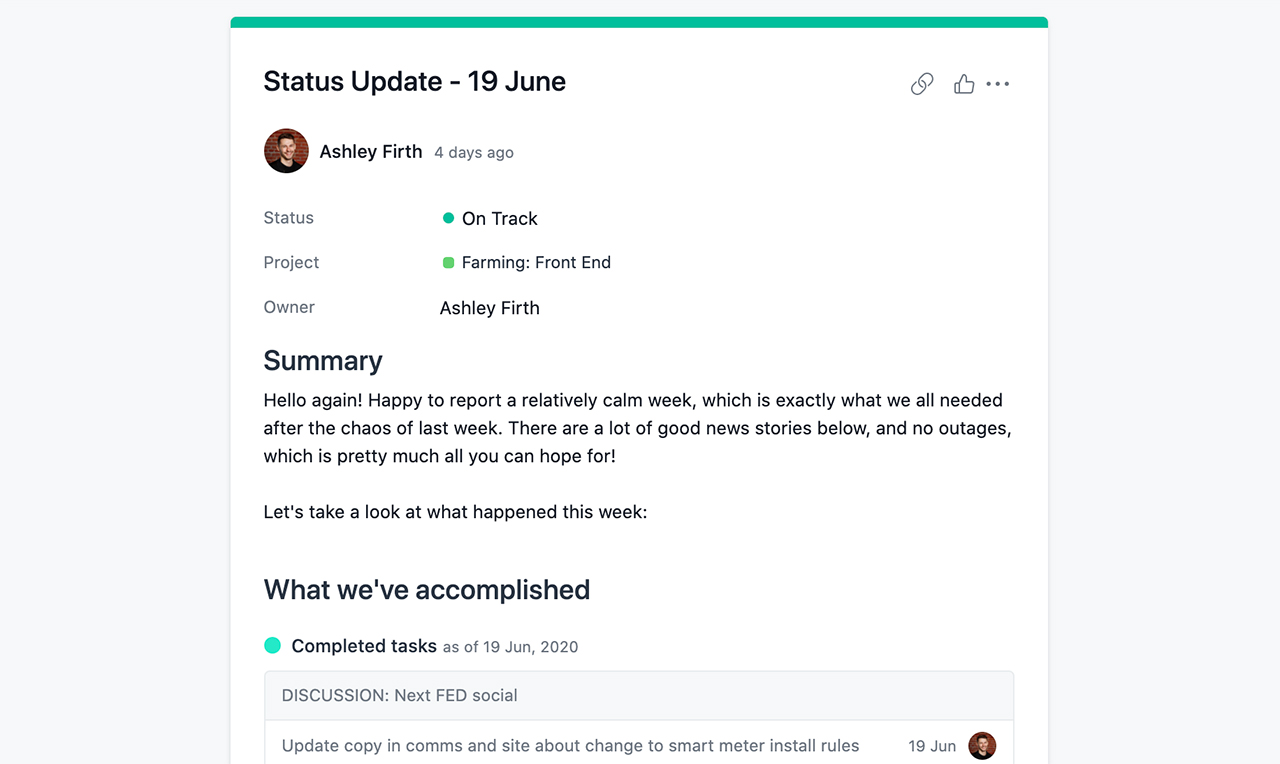 Team members can read how other sub teams are doing (the department has three sub-teams named after the three original pokemon starters. You may laugh but, as naming conventions go, I have room for literally hundreds of new teams before I run out…you’re still smirking, aren’t you?).

It’s possible through Asana’s “progress” feature (we used to be Trello - there’s a post to come about that shift). This report shows:

The last one is my favourite. I gather up things from our slack channel, company-wide announcements, talks that were given, funny jokes, and pop them all in there with links. The report always ends with 8 or 9 great things about this week before they head off for a couple of days to relax and decompress. Now they know it’s coming, I’m usually chased when it’s not there on time.

Oh yeah, I spoke to John and Jane about that separately, sorry I should have mentioned

Octopus moves very fast sometimes, and we’re fond of grabbing the right people in a room and working something out. As our teams get bigger though, that approach has to change slightly.

For us it’s Asana (second reference - I promise I’ll post about it). Nothing is confined to an in-the-room conversation. This needed to happen for an impending remote developer anyway, so I’m glad this is happening now. Ideally you should pick one platform to keep your work in, make every piece as complete as it can be (even if it seems like you’ll be the only one who will ever look at it), and stay consistent.

It sometimes feels pedantic - a small change requiring a card with a description and due date. Sometimes the work needed to set that up, plus creating a pull request can take longer than the change itself. It’s probably even more important then though, as it forms a habit that shouldn’t be broken, otherwise it causes confusion. Plus it’s 2020: we’re better than poorly formatted word documents attempting to be proper briefs I can hand to developers.

Sorry I’m late, I just had to compose myself before joining my eighth zoom of the day

This one is simple. We don’t do lengthy daily standups. We tried them years ago and we gave up quickly - it just doesn’t work for us. I don’t believe in loads of meetings. I genuinely believe if you trust everyone in your team, and give them the freedom and autonomy to make their own decisions, they will reward that trust with great work. This applies across all levels - those that need more help reach out more frequently one week, and less the next. Nobody wants to sit through 45 minutes of micro-updates every morning and then be asked why work isn’t done. Here are the only meetings we have as a team each week:

That’s all we do.

Each sub-team can catch up weekly for as long as they like, but they have complete control of that. I will catch up with everyone in the team once every four weeks to talk, but that is about personal progression and checking they’re doing ok.

Lockdown is amplifying the idea that “some meetings could be an email”, even for those often guilty of calling the meetings. Everyone is suffering from video call fatigue.

Shall we just have a random coffee break?

God it’s good to talk nonsense for a change. It feels so…normal

I’ve seen a few attempts at this, and we’ve even tried some in the wider tech team. There’s the recurring zoom meeting that acts as a remote coffee break. I think the main problem with this is that it gets de-prioritised quickly and it’s at the same time every day. If something happens frequently and it isn’t high priority, it always feels missable.

More than that, you may hop into a zoom meeting that either has no other people (therefore putting you off future ones, or you arrive in a 15-person-strong debate on The Wire vs Breaking Bad. Both are fully possible, and neither is usually what you need.

Introducing RandomCoffees: something Gilly in my team managed to find. Random coffee is a slack app to encourage random, non-work interactions every week. It pairs up members of a team every Monday morning, and each pair has the week to find 15-20 minutes that works for both of them.

Everything in moderation - you don’t want to add too many meetings on top.

What an earth sort of team have I joined…

I know I know, hear me out.

Jobs usually come with perks, and a lot of those feel lost at the moment. I’m doing my best to drive some form of a social life through work at the moment. This has included me sending Deliveroo to everyone’s homes so that we can eat dinner together and chat about anything and everything. One such call broke down to about 30 minutes of messing around with Zoom virtual backgrounds. It was great.

We’re working on the next theme at the moment, and if you have any good ideas please reach out to me on Twitter. We’ll be doing a movie night soon (complete with snacks, of course), but next will be a come-dine-with-me style cooking challenge. We have no idea how this is going to work, but we’ll have fun working it out.

As a wider tech team, we recently trialled a social using “Tandem” - an app that allows for multiple “rooms” inside a group video call so that people can mingle a bit more.

As much as you may want to avoid it given just how many quizzes people have sat through at this point, I’d encourage you to press on and find something that works for you.

All of this is such a work in progress, and not all of them work for everyone. The key theme though is that I’ve tried them.

As a leader I feel it’s important to put the work in to offer options to your team, even if the answer is ‘I’d prefer to just relax away from my computer’

Which is completely fine. People will deal with this situation in their own way. All I can do is try and cultivate a positive energy, throw some ideas out, and see what sticks.