I’ve always been a fan of building a fantastic workstation. Even if it’s not my own, I truly enjoy creating a space that’s neat, where people can do their best work. For me it’s a similar concept to buying a good mattress - you spend so much time using it, so it’s always going to be worth the investment you make in it. I don’t think that investment has to be huge either - the first setup I built for writing my book was clubbed together with discounted products and ex-office equipment from eBay. Instead, it’s the thought that goes into understanding how you do your best work, and setting up a workspace that lets you truly unleash it.

I’ve done one of these blogs for the last few years to detail what my setup is like and what’s changed, so what better way to kick off the year than with the setup that’s (hopefully) going to let me do my best work in 2023! 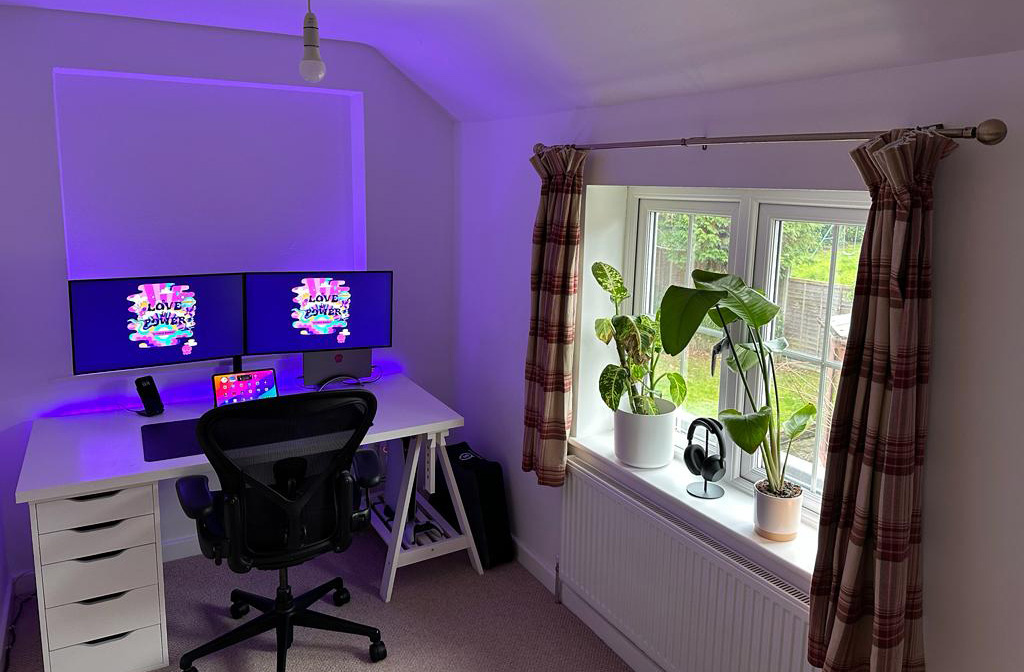 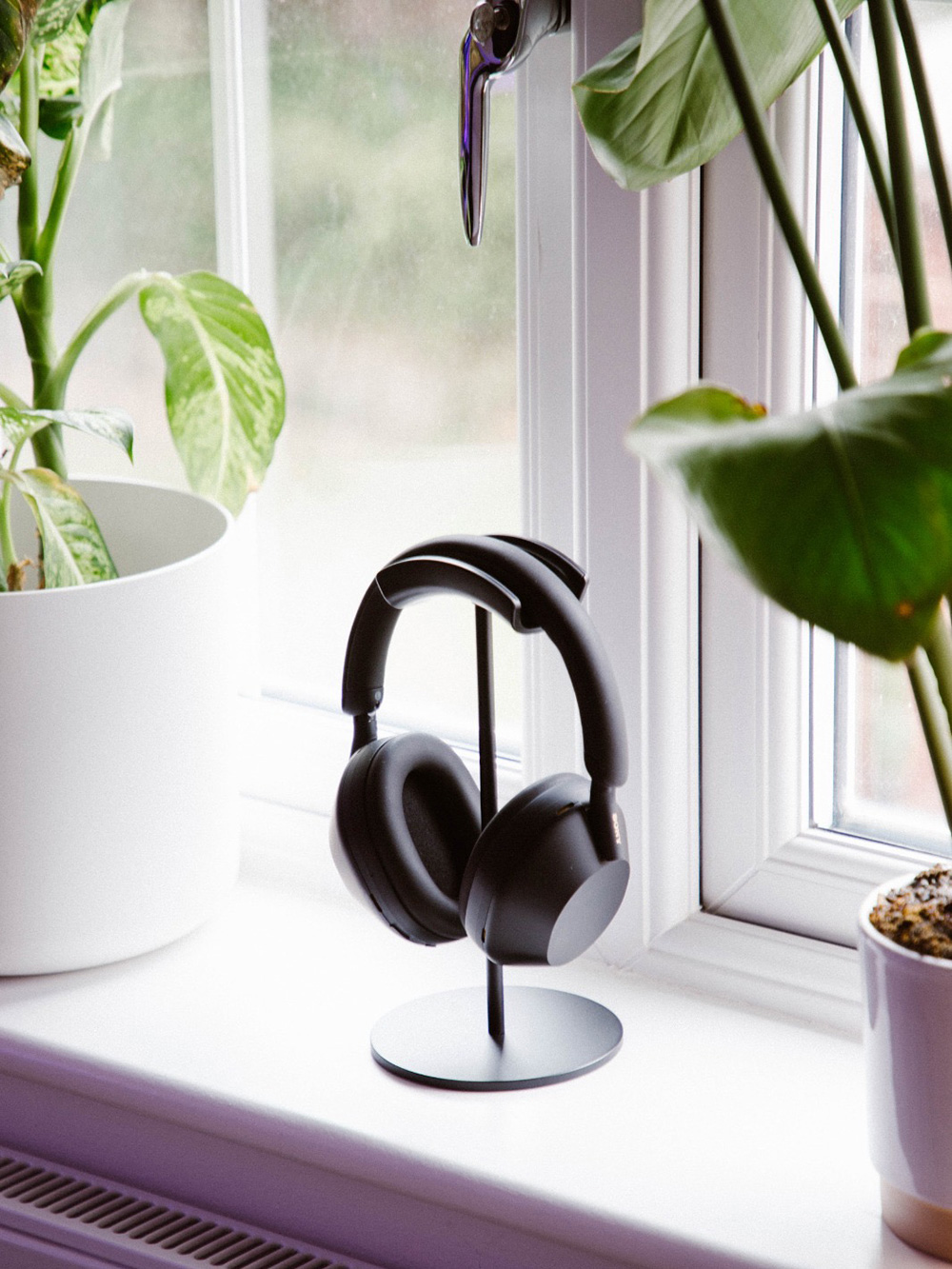 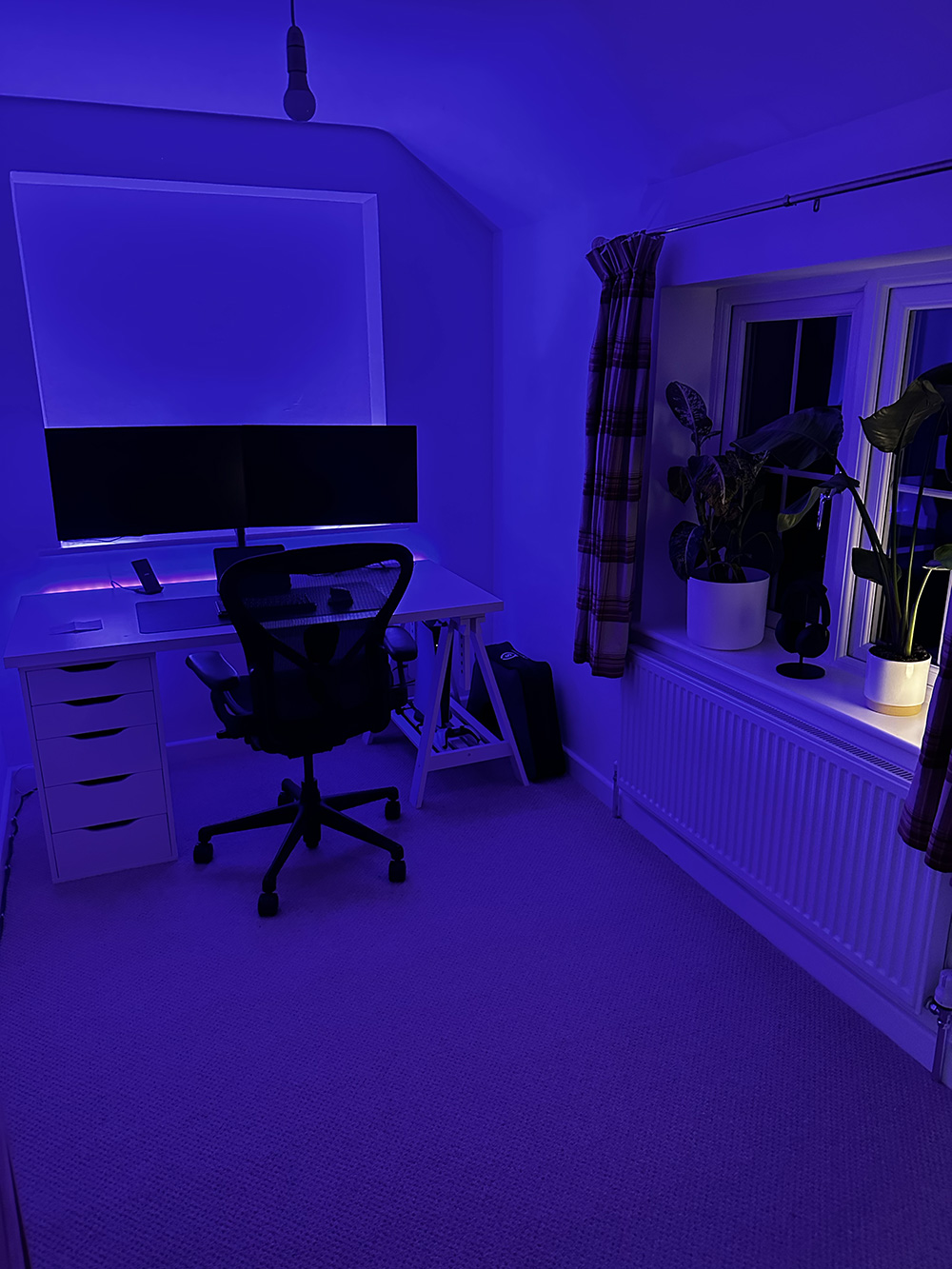 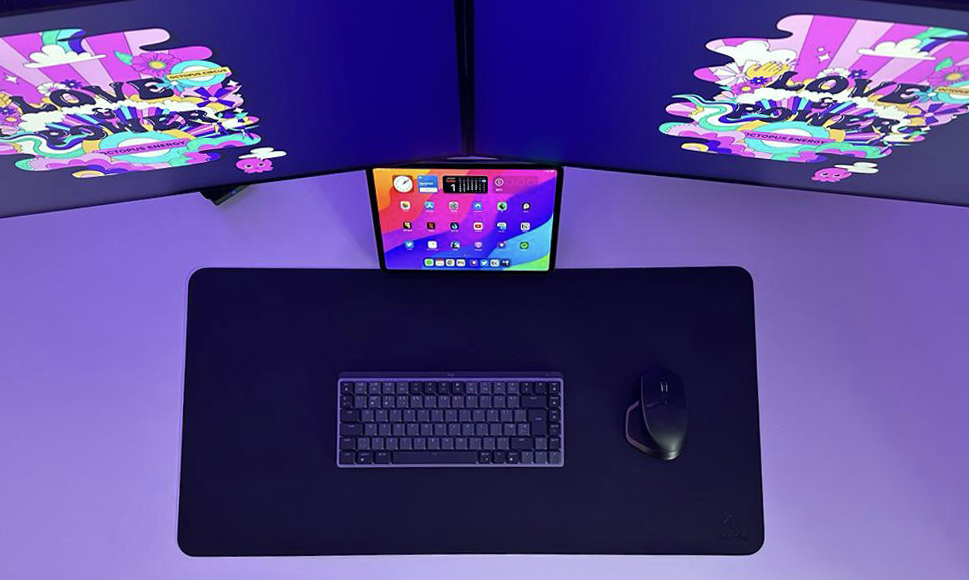 What’s different about this post compared to previous years is the focus. Recently I’ve been inspired (thanks largely to the workspaces newsletter) by what people can do with workspaces as a whole, rather than just their desk.

I’ve been thinking a little less than usual about the increased productivity something might bring, and more about the general environment of the workspace - does it allow me to disconnect quickly and think through a problem? Does something on it distract me more than it helps me?

I envy those that can consistently crack out quality work from coffee shops, messy desks, and just about any other place, but that’s never been me. For me, it’s about:

Every item in my setup is true to one of these things. It’s never a finished article, but it has a clear direction. After moving out of London to have more space, I now have a dedicated room as my office. It’s a little smaller than the space I was using previously for work, but it’s allowed me to think about the whole workspace rather than just the desk itself which is a nice change.

Let’s go through what’s there:

There are a few parts of this setup that I love to bits, but have raved about already in my last update. To save a lot of repetition, here is a short list of those things, as well as a small update on each:

Gone is the Nintendo Switch dock. Gone is the hard drive, the incense, and the plant from the desk. All useful things, but all things that were cluttering the desk and preventing minimalism and room to think. Turns out I had a lot of things added to the space because I could, and because it looked neat. Turns out, I rarely used these things, so it made far more sense to stow them away and bring them out when I did!

I spoke before about workspace upgrades not needing to be expensive investments, and nothing costs less than just clearing things from your desk! Doing this alone, or moving what you already have (the position of your laptop, orientation of screens etc.) has always helped make what’s there feel nice and fresh for me.

After sticking some spare LED strips to the back of my first setup as a joke, they’ve actually become one of my favourite parts. I thought I’d spring for some complimentary lighting this year to accompany them. My desk sits in front of an alcove that is now illuminated (particularly on the gloomier days) by two light bars powered by USB. Their cables are hidden by the screens, and they have an almost silly amount of features (including the ability to have the lights change in response to what it picks up from your phone’s microphone. I tried it once, but never again).

I have to say, the warm light that’s visible in my peripheral vision as I stare at the screens seems to help my mood and, although I can’t prove this, seems to have helped with the eye strain I usually feel near the end of the day. Again, no expensive purchase here, just a well reviewed product from Amazon that fit the bill.

In the last post, I spoke about the pain of trying any other keyboard other than the Apple Magic Keyboard. I’ve been using it for years, and its low profile means that I move over it with complete ease now. The Keychron K4 I tried last year was such an intense departure from what I’d been using that it created a fair bit of wrist pain.

However, I’m currently using something that might be the best of both worlds. It’s called the MX Master Mechanical Mini. I’ve always raved about the MX Master mouse from Logitech, and it feels as though the same level of thought went into the keyboard. For one, it’s the lowest profile mechanical keyboard I’ve used before, which is making the transition from a Magic Keyboard easier.

But why change in the first place? Well, there’s a couple of things that I think this new keyboard can give me:

So I can switch between my MacBook Pro and my iPad with a keyboard shortcut. This makes it very easy to do quick dictations on my iPad but change the odd thing that doesn’t seem quite right. It also meant that I could get rid of the Apple Magic Case for the iPad - something I enjoyed for the keyboard, but hated for the bloat that it added to a beautifully thin device. I’m back to the their standard folding case and loving it.

Something woefully lacking in the Apple Magic Keyboard (hell, they won’t even sell a different colour unless it has the giant number pad attached). Just like the MX Master mouse, the keyboard has accompanying software allowing you to create custom actions for certain keys. These tap into a range of standard Mac OS functions as well as offering you the chance to add your own. These are the ones I’ve used so far:

The last point really ties everything together, and it’s probably my favourite new thing about the setup:

It feels like the whole workspace is one single unit that can stop being a distraction with a single key press and let me start my evening, or just let me take a five minute break to decompress or work through an idea in silence. 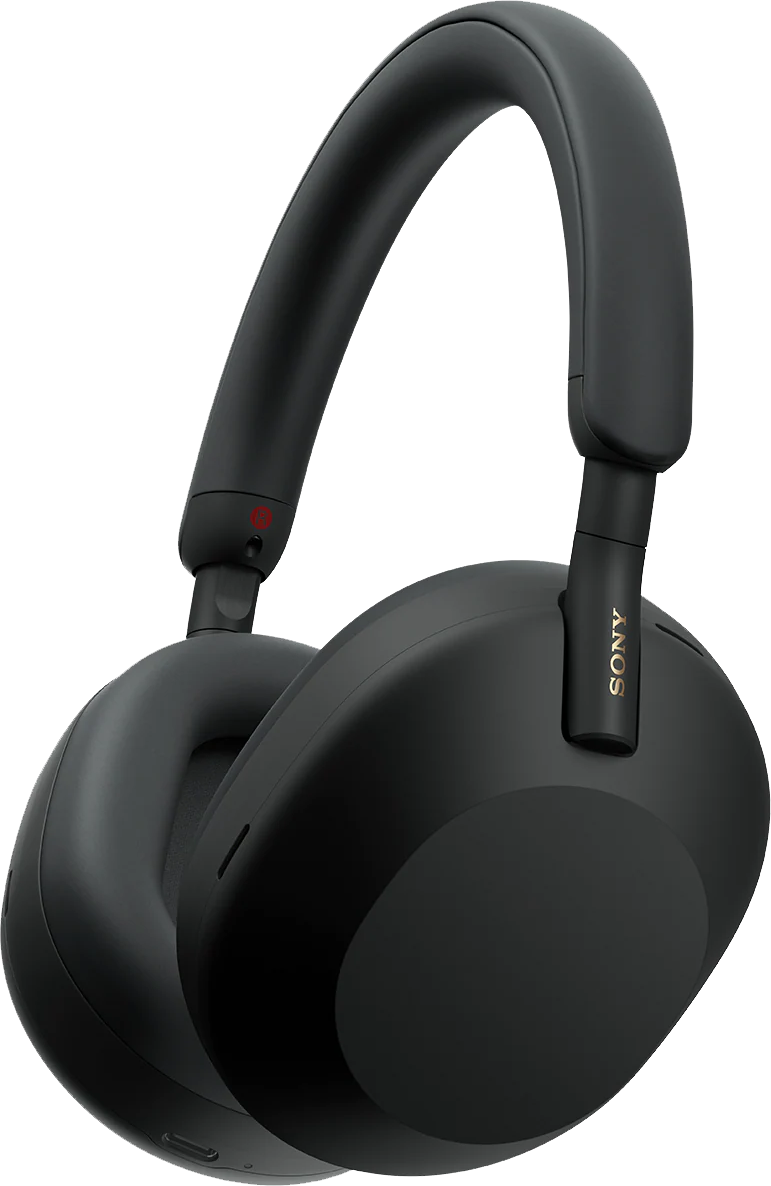 Another thing being changed after years of good use is the headphones! After 6 years of stellar service, I decide to upgrade my Bose QC35’s and, after a fair bit of research, I couldn’t look past the Sony XM5’s. It’s been a few weeks worth of daily use now, and I can see why they’ve won as many awards as they have.

Very easy movement between devices is essential and has worked well, the audio quality is such an upgrade (to be expected given how old the Bose were), but my favourite thing is just how comfortable they are, even after hours of use. This was the downfall of the Bose that I suffered through, but I no longer feel the weight of a long day on my ears as well as my brain!

p.s. I also finally caved and picked up a headphone stand for my windowsill. I’ve forever felt they were superfluous, but I found a cheap one to try and it does feel cleaner than leaning them against my monitor arm (and it shows them off a lot better too). Also, like I mentioned above, it keeps another thing off my desk when it doesn’t need to be there. A certain Dr. Winterbottom will feel quite smug if he happens across this post. 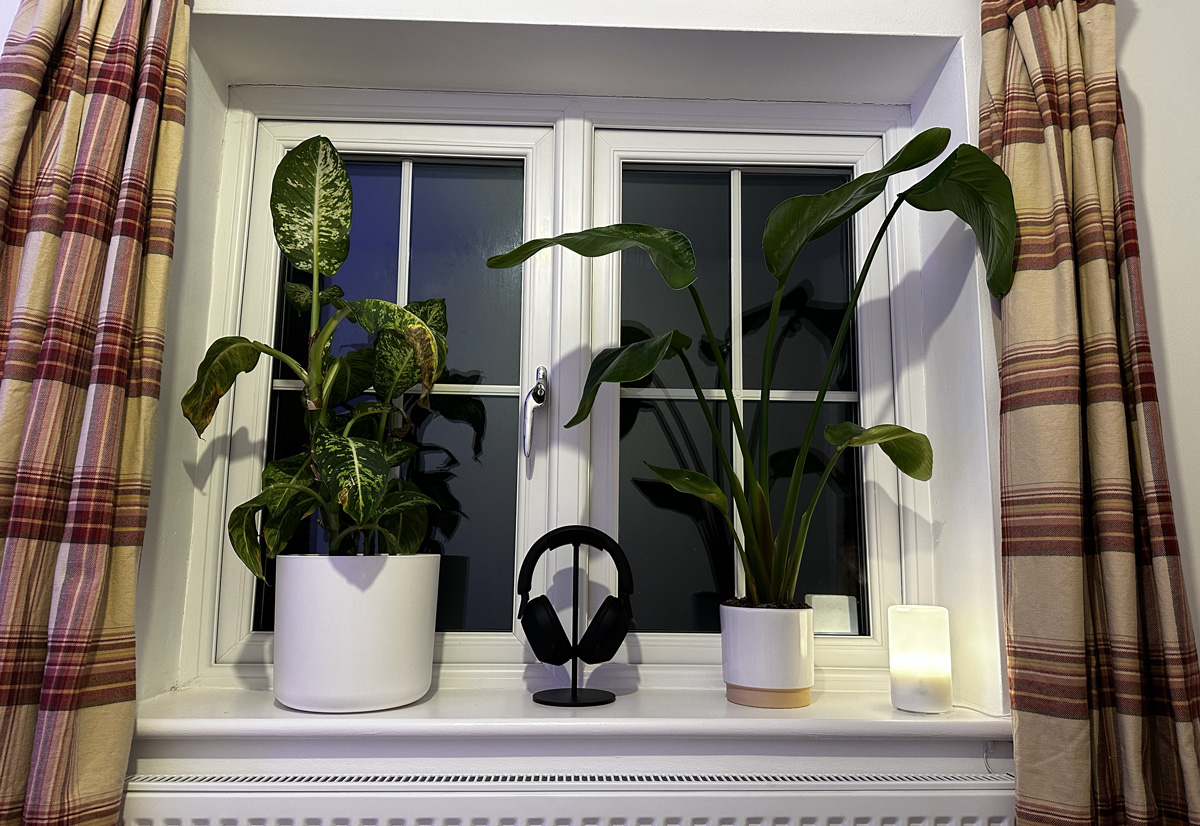 Big fan of this! I knew I wanted something in the workspace to bring a sense of calm and a nice smell that made me want to be in the room, and this gives me both! 100ml of water and a couple drops of diffuser oil, and it spills out lovely smelling vapour for three hours. It passively waters the plants next to it throughout the day, and has a nice light for the gloomier days. I think you can find cheaper versions than this one from Muji, but it was a Christmas present that I’m very much enjoying.

The two fine fellows shown above are named Marzipan (left) and Jesus (right). I let my fiancé name them - I think she did a great job. I talk to them all the time - they’ve heard a lot of bad ideas and acted as my “rubber duck test” for thinking through a problem. This used to be the job of my fish during my first setup, but plants can’t swim away when your idea sucks so this setup works far better for me. They chill by the window and bring some much needed colour to the place. There’s also the small matter of the tartan curtains that came with the place bringing colour, but let’s stay focused on the nice greens.

This was a tough one! Cable management is always something I spend (arguably) too much time on. The cleanliness of a setup when everything is neatly tied, wrapped, and stowed away is a beautiful thing, and this one is no exception. I’ve already gone though the various little tools I use to manage my cables, which you can read a bit more about here. Here are a few photos, if only to satisfy my own pride. 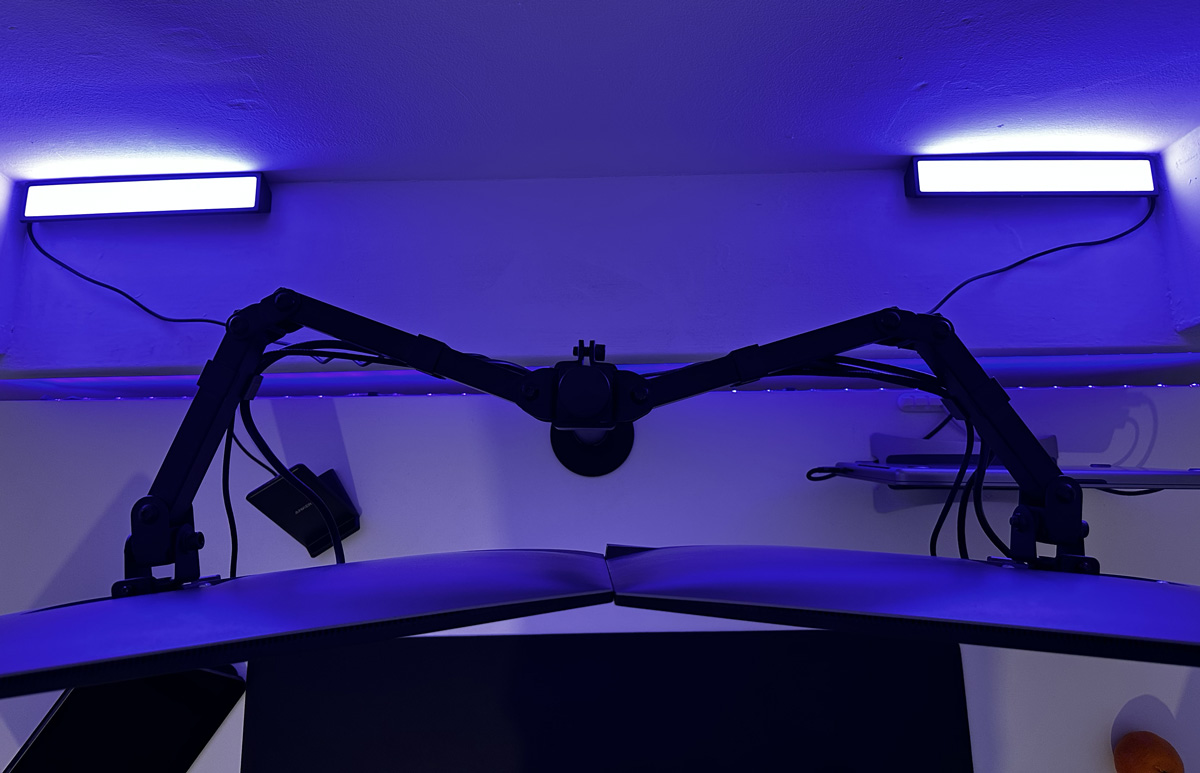 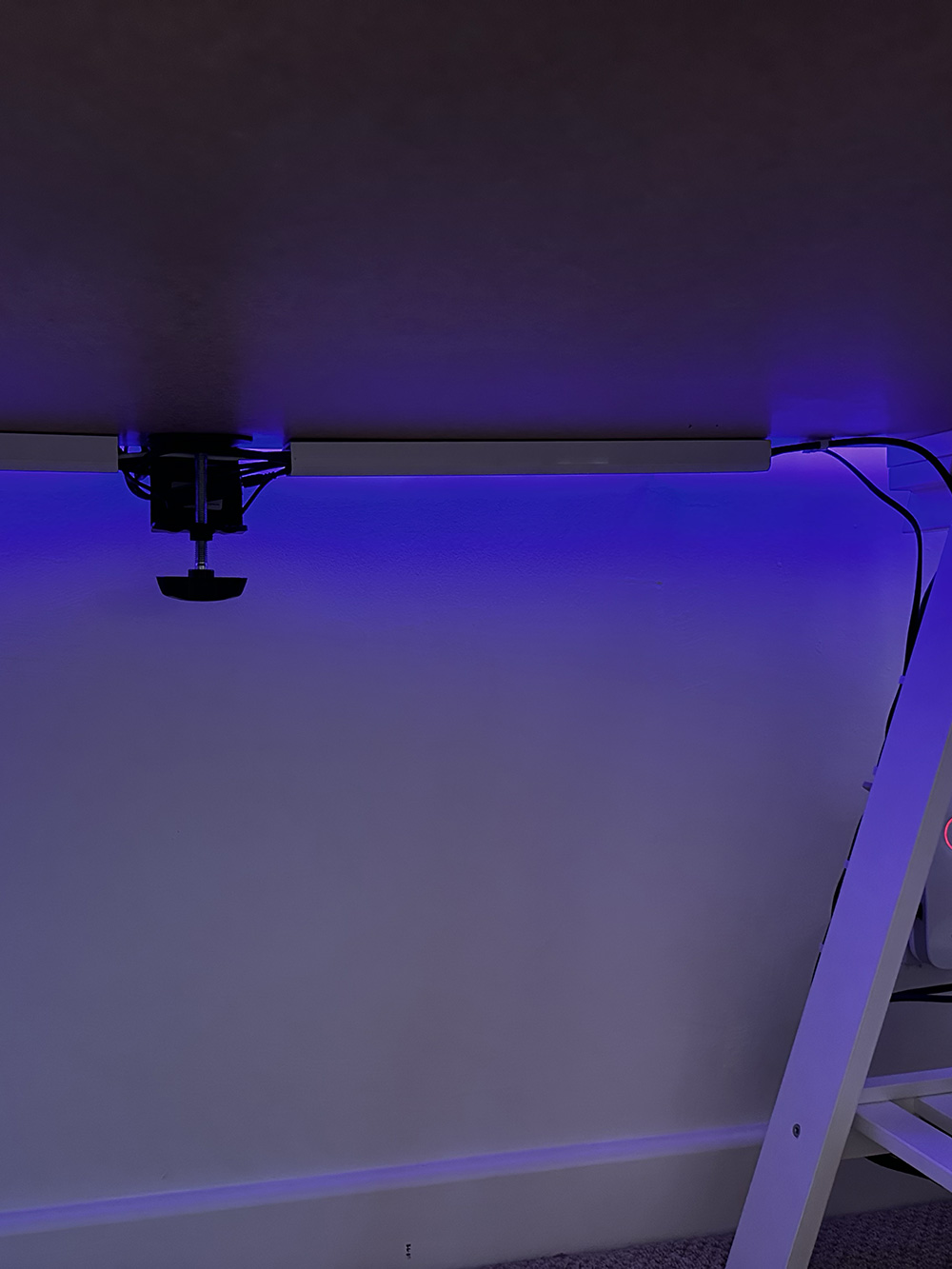 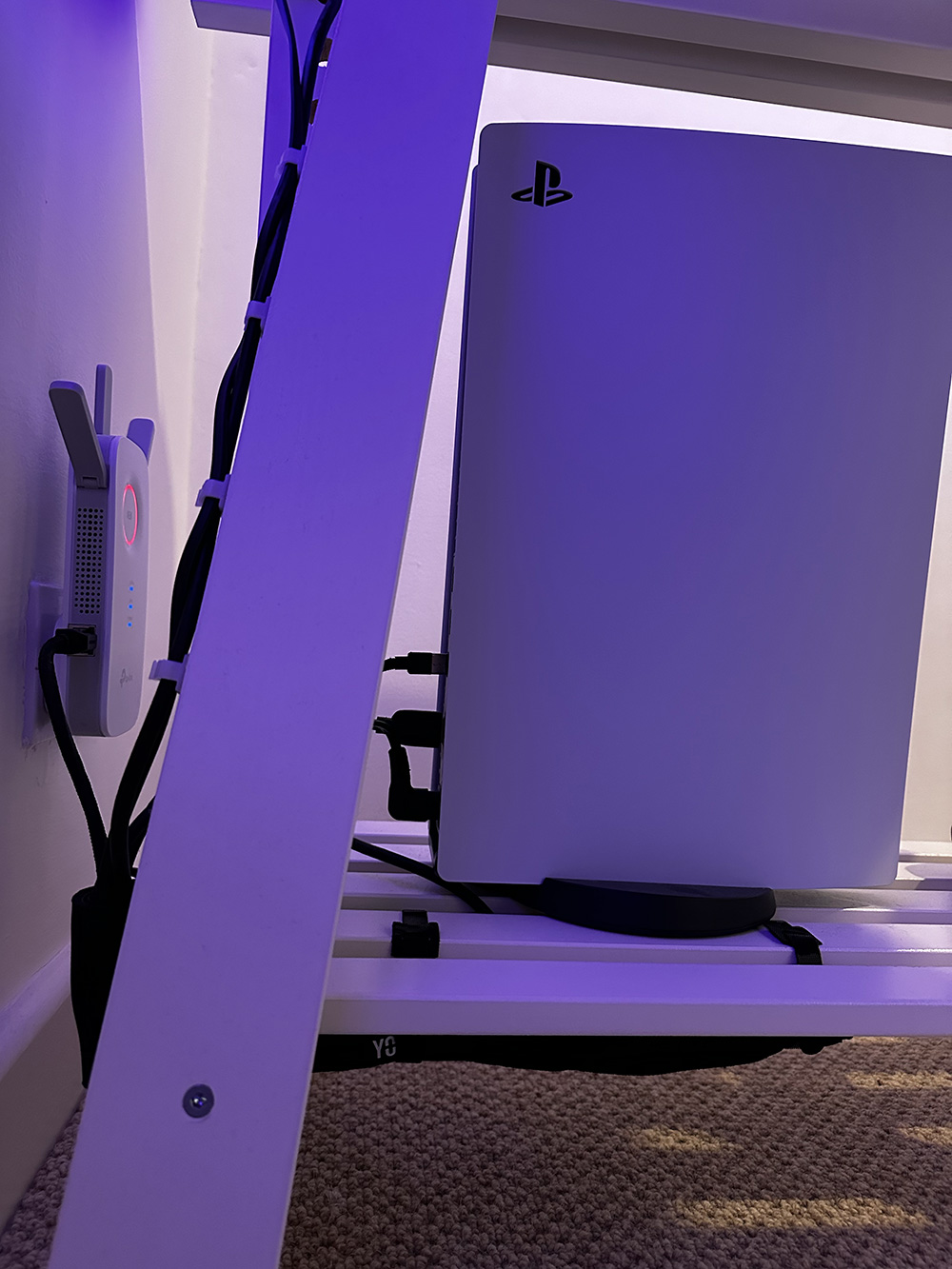 Adding the extra lights through the monitor arm was neat, and I’m not too fussed about the stray single cables, as they’re hidden from view completely by the monitors. The real challenge here was the weight of the PS5 cables as well as the new T-Link network extender I picked up to ensure I had stable LAN connectivity to the console. All of that made for too much cable to neatly tuck behind the leg of a trestle. I knew I wasn’t going to achieve completely hidden cables like last time, so instead I used a combination of tricks to get as close as possible:

As you can tell, I am very sad. I am also very pleased about being a cabling neat freak.

What could be better?

Because it’s never a finished setup…

There we have it! I enjoy cataloguing my setup every year, and I’m intrigued to see what it’ll look like next year. In the meantime, if you’d like any more info about anything I’ve covered here, just drop me a line on Twitter. Happy 2023!