Useful shortcuts to reduce mouse use

I’ve had a bit of wrist pain recently. It could well be because lockdown has me spending more hours than ever at a computer (who knew commuting was good for something), or that my remote setup is just different enough that pressure is being put on the wrong places. Either way, I’ve been trying to use the keyboard more and the mouse less in order to reduce the “micro-movements” that using a mouse or trackpad require.

More generally though, getting to grips with shortcuts can help you move around a computer consistently quicker, and they remain useful when you’re working on a laptop and not just on a full desktop setup. This isn’t a post of one hundred shortcuts that you’ll never remember though - I’ve got a few general ones I think everyone should know, and some apps that have great ones I use many times a day.

Forewarning these are all for Mac. There are likely Windows equivalents for many of these (usually swapping CMD for CTRL), and the apps below definitely work on Windows, but I didn’t check thoroughly because it didn’t apply to me. Sorry!

I’m stunned this isn’t shared more often. Every time you hit the brightness or volume buttons, it’ll adjust the level by one increment. This is simple, but maybe there are times where you’d like to tweak these levels by just a little bit. Perhaps one volume setting isn’t quite loud enough, but the next one up is somehow just too loud. This is easily fixed by adding Shift + Option, and more granular control is yours!

Most people know that you can take a screenshot on a mac, but there are a few ways you can do this!

CMD + K is easily the best one. Using this shortcut opens fuzzy search - just start typing the name of a person or channel, and hit Enter when you find it!

SHIFT + CMD + U - Add a link to highlighted text

:NAME_OF_EMOJI: - A quick way to type out an emoji

I get called a nerd regularly for this one. Slack’s syntax for emojis (standard and custom) is a colon (:) then the reference name of the emoji, and then another colon. However, if you type the first colon and start typing the name of an emoji, Slack will provide you with all possible options as you type. Once you know a few common emoji names, typing them out in this way saves a lot of time over clicking or searching for the one you’re thinking of. Here is a full list of the references that Slack uses. 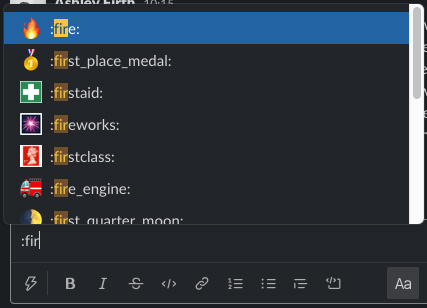 It also works in WhatsApp on desktop too, which is a bonus. Come learn emoji names and be branded as a nerd like me!

The only drawback sometimes is that some of the reference names aren’t quite what you’d expect . For example, for this emoji:

most people (myself included) would type lightening or thunder, but its name is actually zap…

A lot of my initial trouble with non-keyboard movement up until now was around searching for apps, or switching between them. CMD + Tab is mostly useful for switching back and forth between the two most recently used apps quickly, but when you haven’t used the app you’re looking for in a while, even this shortcut becomes arduous.

There are two neat solutions to this as far as I’m concerned - grouping your commonly used apps together somehow, and making your own custom shortcuts. Let’s look at both!

Franz satisfies the first point. It’s a free app that essentially acts as a wrapper to a wide range of commonly used apps, thereby allowing you to have access to them all inside one application. You set them all up individually, can have as many or as few as you’d like, and change their order: 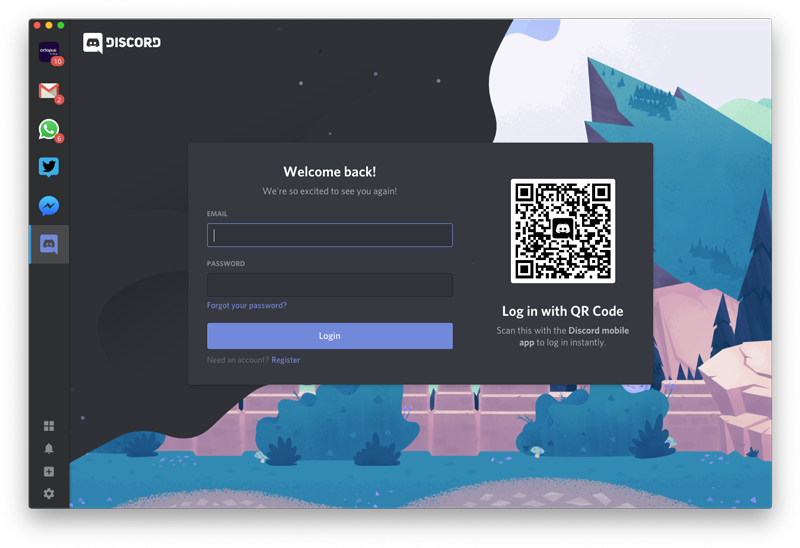 My setup has Gmail, Slack, WhatsApp, Twitter, Messenger, and Discord. That alone is a time-saver on the constant switching between apps, but what makes it even better is that there’s a shortcut to bring up each app window depending on the order you’ve set them. So for my setup above, hitting CMD + 1 would bring up Slack, CMD + 2 for Gmail, CMD + 3 for WhatsApp etc.

It’s such a game changer - less apps open, quick access to essentials and, relevant to this post, very handy shortcuts for switching between them.

This app satisfies my second point! I was introduced to Hammerspoon recently by Karim El Khazaani in my team and I already love it. After looking through its documentation, it’s definitely capable of an insane amount, but I like to try using something in a few useful ways and make it a habit, and then see what else it can do.

I’m still in this first step, but with minimal effort you can set up a config file that creates a specific shortcut for whatever application you want. For example, here is my current config:

With this set up I can, for example, use CMD + OPTION + G to head straight to Google Chrome. Think about all of the typical interactions you might use to find Google Chrome:

All of those different ways - nothing consistent. In this case you can learn one shortcut, and you’re set: the shortcut will focus you on that application or, if it isn’t open, open it for you.

Alfred is so epically powerful it deserves a whole post on its own. I replaced spotlight with it a while ago and regret nothing. I won’t go into every feature, but if you’d like to learn more you can read about it here. It has some great features out of the box. Here are a few examples of shortcuts I use Alfred for: 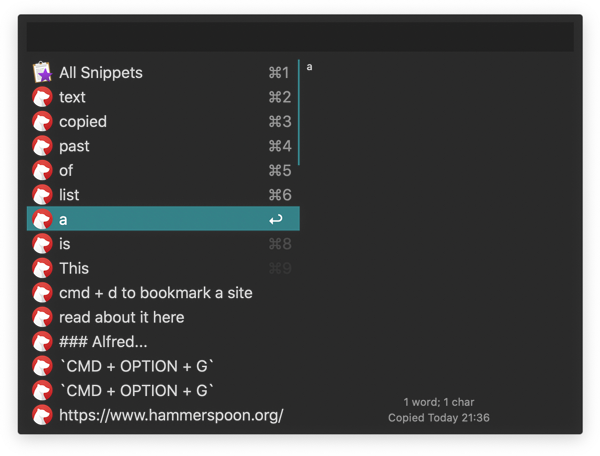 When you start building up a collection of shortcuts you use consistently across the applications on your Mac, you workflow starts to become much, much quicker.

For example, if I wanted to share an article I’d bookmarked with someone on WhatsApp, I can do the following:

All of that without touching a mouse!

In each instance it saves extra movement on a regular basis. Together though, they create a very hands-off-mouse approach to using your computer every day.